Kristin D. Van Risseghem tagged me to share seven lines from the seventh page of a work in progress. Naturally, I chose The Order of the Key. 🙂

I may have gone a tad over 7 lines, just because I’m a sucker for a decent ending. Also, just so you know – they just fought some creatures. Happy reading!

“Any more?” Kyp’s breath rattled from his lungs.

I really hoped he wasn’t depending on me to give the final all clear. “I think we’re good.”

He groaned and let himself slide to the ground, using the wall for support. “Just a minute. We’ll rest for a minute, then I’ll take you back home before more come.”

“Uh-huh.” I plopped down beside him. The concrete was surprisingly cold. Now that nothing was trying to kill me, the adrenaline seemed to be wearing off, and my legs were starting to shake.

He winced. “Pretty sure I broke all of my ribs. Are you okay?”

I looked down at my legs. While they were blood covered, the wounds were mostly healed. “Huh. Must not have been as bad as I thought.”

Kyp shook his head. “Jaina didn’t tell you anything, did she?”

Now I’ll tag 7 other authors to play this game: 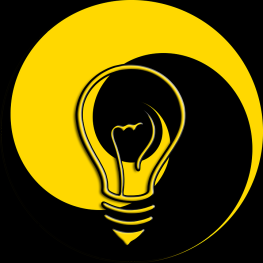 Inspiration is such a strange and essential force for an author, and we need to pull it from wherever we can find it. For me, inspiration can be like a patchwork quilt, a line from a song, a character from a book, a writing style, and a plot idea can come together and be woven into an original idea.

For The Order of the Key, the first seed came from watching Buffy the Vampire Slayer. The series was the first time I’d ever seen a television show that crossed genres, styles, and attitudes. Buffy could be funny in one episode and tragic in the next. Sometimes it was horror, sometimes it was paranormal. Sometimes it was episodic, sometimes it was arc-based. I loved the way the series mixed it up, and I saw that as a powerful way to tell a story. Life can be all of those things, and it’s fun to shine a light on that. So when I dealt with the new characters I was forming in my head, I tried not to conform them to one specific style, and let them just be people – which led to my Contemporary Fantasy, which has elements of horror, elements of comedy, elements of romance.

Now, I had never read a book that behaved the way Buffy did as a television series. And I also had fears of giving my characters flaws. I was concerned about making them far too unlikeable. And then I read The Otherworld series by Kelley Armstrong. Reading Kelley’s books gave me both the courage to build unique systems of supernatural characters and to build complex characters with gray areas. I thought I always needed the good guys to be stalwart and true or I’d risk their likeability. Ms. Armstrong soundly corrected me.

The members of the Order are all trained at an Estate that doubles as a school and a living space. If I said anything but X-Men inspired me, I’d be lying.

The Hunger Games trilogy by Suzanne Collins inspired me to explore the harsh realities of war. The Chaos Walking trilogy by Patrick Ness and The Curious Incident of the Dog in the Nighttime inspired me to take chances with the voice of the narration. My lead character, Jacklyn, has a very unique point of view, and we get the story from her. It never had the same magic when I tried to tell it third person.

I’m sure there are other things that linked together to create the idea for The Order of the Key. I can think of many times where I’d hear a turn of phrase, the lyrics of a song, or met a person that made me want to write something down. As artists, we spend our entire life fed ideas and inspiration, we internalize that, and when we’re ready to create something ourselves, these ideas mix together to create something truly unique. I hope you enjoy my unique creation.

Where do you find inspiration?

For anybody who was able to make it to the recent event I attended, it isn’t a surprise that I now have some Order of the Key promo art to show off. And I. AM. EXCITED. Check it out below. 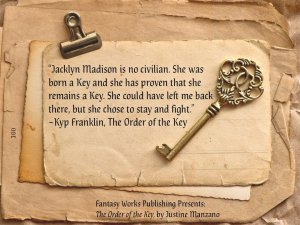 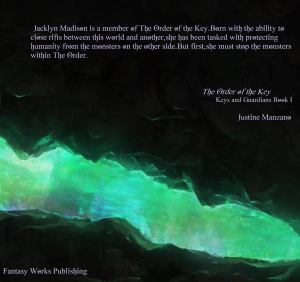 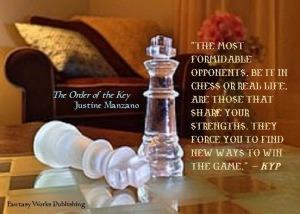 I can’t wait for you guys to understand the significance of every single one of these quotes. Stay tuned for more info!

Hey folks! I’m guest blogging today at All the Way YA, discussing romance in YA and what the potential implications are. See a preview below. For more, click here.

When the movie Tomorrowland was doing its press tour, an interview in Vulture with writers Brad Bird and Damon Lindelof (and also star George Clooney) in which Lindelof was quoted as saying the following when asked about rendering strong female characters. “What if she doesn’t get distracted by romantic entanglements? What if her “romance” is with the future?”

In my infinite insecurity (I am, after all, a writer. We’re all insecure.) I started to think about my story while panicking. Was there something wrong with romance in an adventure story? My story doesn’t involve a romance with the future! The relationship between my main character, Jacklyn, and her confused and confusing as hell potential love interest, Kyp, is a central part of the plot. It’s often the driving force. By not having my main character’s true love be adventure, or being a hero, or something more abstract, was I being somehow anti-feminist? Considering my strong feminist stance, I was genuinely concerned that I had miscommunicated my message. 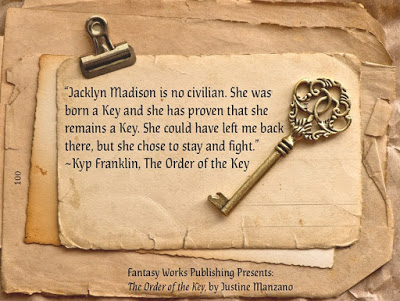 Hi all! I’m making a guest visit this week on Jena Baxter’s blog! Or…err…*cough* Jacklyn Madison, my main character from The Order of the Key is, anyway. Check out Jacklyn’s interview here! And while you’re at it, check out my new piece of promo art above. More to come!

Hello all!  Today I am guest blogging over at the wonderful YA blog, All the Way YA.

Here’s a quick preview of what you’ll find there:

There are plenty of traditional routes towards getting published, and when I started shopping out my manuscript for The Order of the Key, Book 1 of my series, Keys and Guardians, I systematically went through all of them.

I was hitting brick walls left and right. Even when I got a step closer, pitches leading to partial manuscripts ended up leading to zilch. I wasn’t at it for very long, but I’ll admit that I was beginning to get discouraged. I’m an efficient organizer, which means that in six short months I managed to rack up an impressive number of rejections.

For the rest of the article, go visit the main post!

Enjoy! And feel free to comment back here, if you have any feedback!

I have to be honest – I, the writer, cannot actually put my excitement into words. The Order of the Key, my young adult contemporary fantasy novel, has been contracted for publication by Distinguished Press, a relatively new publishing company that specializes in the publication of series. Yes, you read that correctly. Series. Which means, not only has Order been picked up, but the entire Keys and Guardians series.

The contract was finalized yesterday and the Distinguished Press family has already welcomed me with open arms, and by family, I mean the staff and the authors. I can already tell this is going to be a fantastic experience.

For those of you who don’t already know, the story of Jacklyn Madison, my main character, was the first thing I ever wrote in my adult life. The first incarnation of this story was an epic trilogy at 600 pages apiece because I had no idea what I was doing at the time. I wrote this insane unwieldy thing that doesn’t look remotely like the thing you will get to see in your hands when this book is released. It has been a ridiculously long journey with this character and I have reached a new stage, a new adventure.

My novel is getting published. Everything will be different from here on out.

To those of you who have enjoyed listening to me ramble on about my writer’s journey, I hope you will enter a new stage with me because I can’t wait to share it with you.

Thanks again for all of your love and support. I’ll keep you posted on all the release information once I know!