As I’ve mentioned in some of my past book reviews, I am currently making my way through some books that can be seen as a comparative title to my own books. This time around, the book is The Stars Never Rise and its sequel, The Flame Never Dies, by Rachel Vincent. This series was recommended to me as a comparison to my story, The Order of the Key, due to the family connection between siblings, and the main character’s drive to protect hers in the midst of an unbelievable and frightening world. 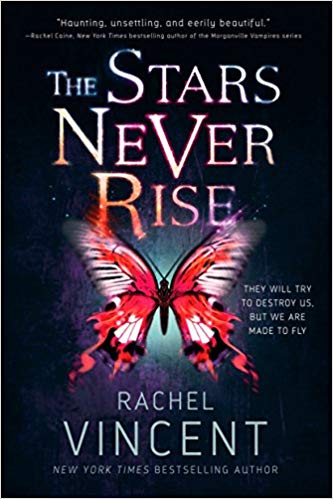 Book Summary: Sixteen-year-old Nina Kane should be worrying about her immortal soul, but she’s too busy trying to actually survive. Her town’s population has been decimated by soul-consuming demons, and souls are in short supply. Watching over her younger sister, Mellie, and scraping together food and money are all that matters. The two of them are a family. They gave up on their deadbeat mom a long time ago.

When Nina discovers that Mellie is keeping a secret that threatens their very existence, she’ll do anything to protect her. Because in New Temperance, sins are prosecuted as crimes by the brutal Church and its army of black-robed exorcists. And Mellie’s sin has put her in serious trouble.

To keep them both alive, Nina will need to put her trust in Finn, a fugitive with deep green eyes who has already saved her life once and who might just be an exorcist. But what kind of exorcist wears a hoodie?

Wanted by the Church and hunted by dark forces, Nina knows she can’t survive on her own. She needs Finn and his group of rogue friends just as much as they need her.

What I enjoyed: I found the idea of the Church being in charge in a dystopian future to be an idea ripe for a writer’s playground, and Vincent uses it as such, creating images wrought with the harsher sides of religious rule over the centuries. It also pokes at the idea of the corruption of religion. This is a world that feels rich and lived in.

Nina is a great main character with a strong motivation–she does everything to protect her sister. But even in that, she makes mistakes. She isn’t a perfect hero, and some of the wrong turns she makes are some of the best parts of the book.

Nina amasses a group of friends throughout the course of the story that end up as beloved and dynamic characters. Grayson becomes Nina’s shoulder to cry on, Maddock and Reese become her teachers, and Devi becomes her foil. Devi, in particular, is a fun character precisely because she doesn’t really get redeemed. She’s good, in the more important ways, but she’s also nasty and rude. And then there’s Finn. Finn is Nina’s love interest, the exorcist that saves her. Finn has the best backstory–but I can’t explain anything! It’s all spoilers. But they are all good spoilers, that end up being the most interesting part of the story.

The second book is a fitting sequel, with a new main big bad, a new creepy section of the world to explore, and the unveiling of some surprising plot elements.

What I’d avoid: I got the distinct impression when reading this story that the author didn’t really know everything she wanted to do with this world. Some surprises and plot twists paid off well, and some felt like they came out of nowhere. Particularly one secret regarding a character in which that character had a special ability that only made sense if the end of the story was already true. I can’t really explain what I mean, but I facepalmed when I realized where it was going. As good as the story and the characters were, this particular event felt strongly like the author asserting their will. It was a frustrating moment.

Another issue I had with the story is that it was billed as a duology and the ending of book 2 left a huge plot thread open. I actually looked up when the next book was coming out. I thought for certain that it was a trilogy. Book 1 and 2 closed well, but there was far too much story left to tell.

Would I recommend it:

Though I had my issues with this story, these were all things I noticed in thinking about it after the fact (aside from that one facepalm moment). I would still say that, on the whole, the story was an interesting and fun ride. I was forced to stop reading a few times throughout the course of reading it, and I always found myself itching to get back. I enjoyed the characters and the entire plot conceit. Despite the issues, it was totally worth the ride. I would definitely recommend this book for lovers of dystopian YA.

What can I learn from it: I think the big lesson I learned from this book is to make sure that any major plot twists I intend to pull off in future books are planned well in advance, and all strange things that can’t be explained in book 1 at least have a firm explanation in my mind, as the writer. And if I come up with a good plot twist later that doesn’t fit the narrative, I’d better have a damn good explanation for it.

All in all, The Stars Never Rise and its sequel were both suspenseful reads that any lover of YA dystopian will enjoy. Just don’t squint too hard at it. You could easily miss the flaws if you aren’t looking too hard.